The human brain is a complex organ that remains a mystery unto itself.  While the common myth that we only use ten percent of our brain still prevails, valuable insight on the matter proclaims we actually use much more than that.  “We use virtually every part of the brain, and [most of] the brain is active almost all the time.  Let’s put it this way: the brain represents three percent of the body’s weight and uses twenty percent of the body’s energy,”  explains neurologist Barry Gordon at Johns Hopkins School of Medicine in Baltimore.

That fact makes the idea of someone living functionally with only ten percent of their brain intact truly mind-boggling.  But a French man who lives a relatively normal, healthy life is doing just that.  Despite missing 90 percent of his brain, the man isn’t mentally disabled.  The case has been puzzling scientists for nearly a decade.  Though researchers found he had a low IQ of 75, he was working as a civil servant and was also married with two children.  The man is challenging the way we understand consciousness, which begs the question:  How can someone without the majority of their neurons still be aware of themselves and their surroundings?  Being aware of one’s existence remains a confusing subject, with research still fairly thin.  Yet, since we do know awareness is somehow based in the brain, this man’s abilities are truly confounding.

At 44 years old, the French man went to the doctor complaining of muscle weakness in his left leg.  Brain scans showed his skull was mostly filled with fluid.  There was a mere thin outer layer of actual brain tissue, while the internal part was almost completed eroded away.  Doctors concluded that hydrocephalus – a condition he had been diagnosed with it as an infant – had slowly destroyed the brain over the course of 30 years.  As a child, it was treated with a stent.  Because it was removed when he was 14 years old, fluid built up in the brain and resulted in the evident erosion.  His apparent well-being led scientists to question what it actually takes to survive and be aware of the life you’re living, as this man certainly demonstrated despite his condition. 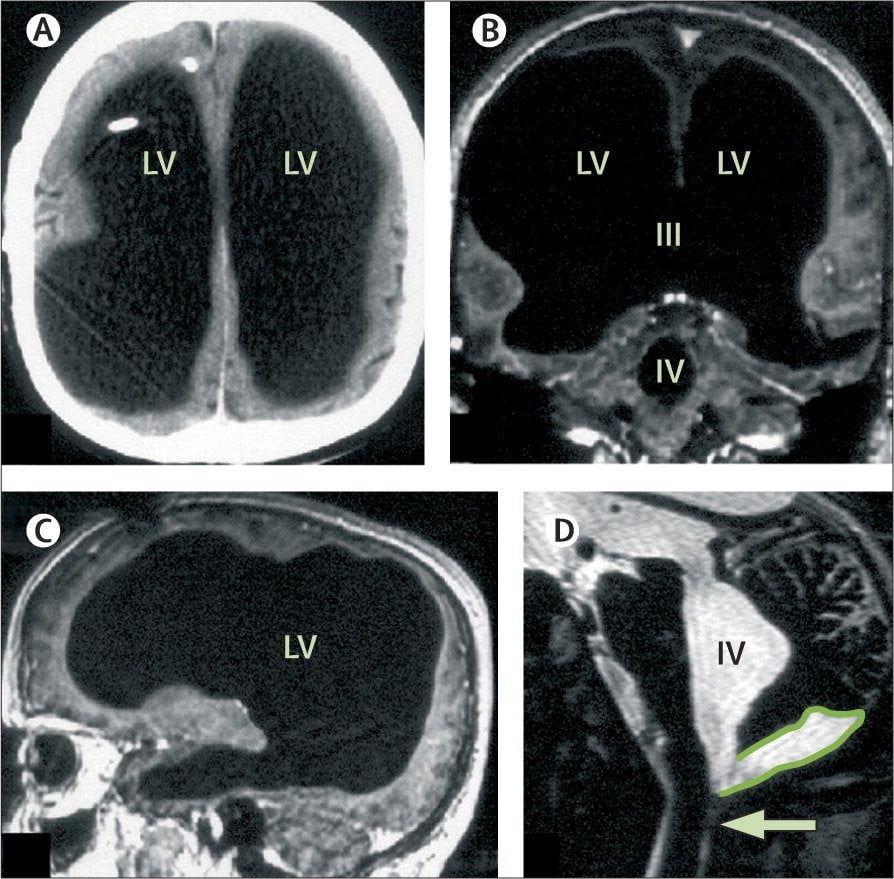 Researchers have linked consciousness to regions of the brain such as the claustrum (a thin sheet of neurons running between major brain regions) or the visual cortex.  But these hypotheses don’t correlate with the French man’s awareness.  “Any theory of consciousness has to be able to explain why a person like that, who are missing 90 percent of his neurons, still exhibits normal behavior,” states Axel Cleeremans, a cognitive psychologist from the Université Libre de Bruxelles in Belgium.

Axel Cleeremans hypothesizes that consciousness is not something we are born with.  Rather, it is learned and such a phenomenon can occur in different brain regions.  Its location can be flexible.  “Consciousness is the brain’s non-conceptual theory about itself, gained through experience – that is learning, interacting with itself, the world, and with other people,” he says.  His hypothesis, called the “radical plasticity thesis,” is connected with recent research that has found the adult brain is more adaptable than we originally thought – even capable of taking on new roles when an injury occurs.

According to Cleeremans, even though the French man’s remaining brain was so small, the leftover neurons were still capable of generating a theory about themselves.  This explains how the man remained conscious of his actions.  This situation is a reminder that our brains can learn more than we might think, even under grave circumstances.  It also gives us hope that one day we may be able to reverse some of the illnesses caused by neurodegeneration.

Consciousness can operate beyond the brain, body, and the present, as hundreds of experiments and millions of testimonials affirm. Consciousness cannot, therefore, be identical with the brain.  In science, we have largely ignored how consciousness manifests in our existence.  We’ve done this by assuming that the brain produces consciousness; although how it might do so has never been explained and can hardly be imagined.

My conclusion is that consciousness is not a thing or substance.  It is a non-local phenomenon.  Non-local is merely a fancy word for infinite.  If something is non-local, it is not localized to specific points in space, such as brains or bodies, or to specific points in time, such as the present.  When scientists muster the courage to face this evidence unflinchingly, the greatest superstition of our age – the notion that the brain generates consciousness or is identical with it – will topple.  In its place will arise a non-local picture of the mind.