When you are missing the Lost Key you will remain one click away from the truth.

Open your third eye Brothers and Sistas, Venus is the falsely acclaimed Nibiru ship, it is headed this way and its getting larger which can be seen on certain days like December 30th, 2018.

The Mayan and so many other cultures were tracking this same event coming.  Some calling themselves Venusians have designed your religions by attempting to usurp the Most High Vibration who is liken unto your Torus; Free Energy. 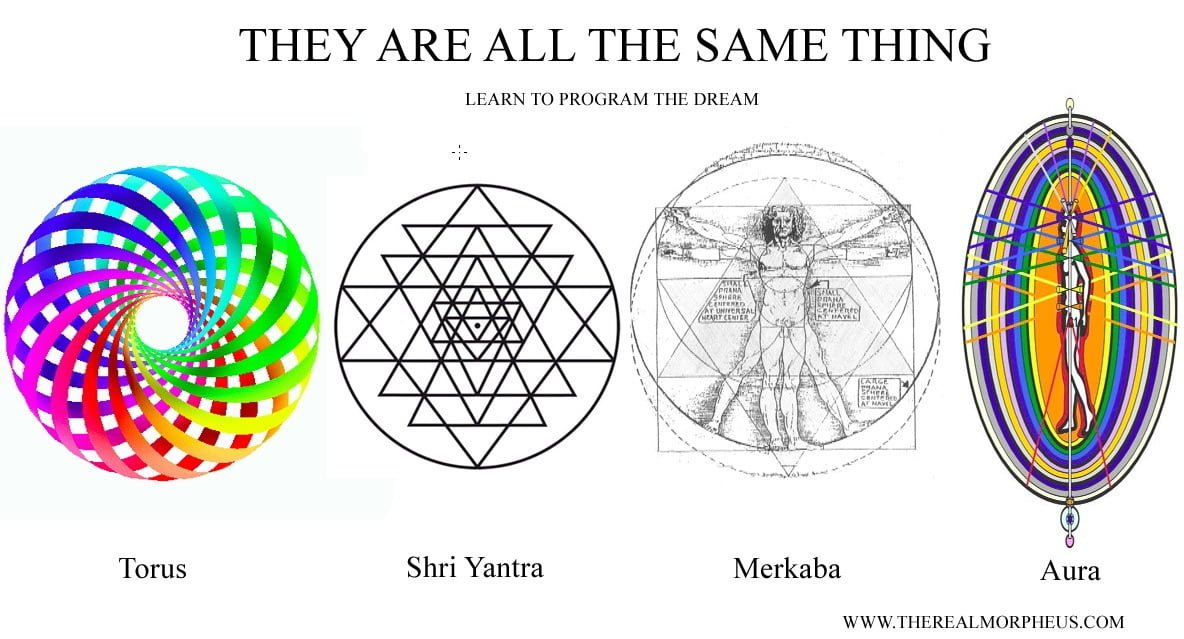 Love is and always will be the ultimate vibration.  5th column, however, still prevails.  They have been selling fossil power to you but using free energy to produce it placing the planet in great debt to Self.  The planet is us collectively.

The next shift is we figure out the power of love and unity.

Know yourself only and you know all things! 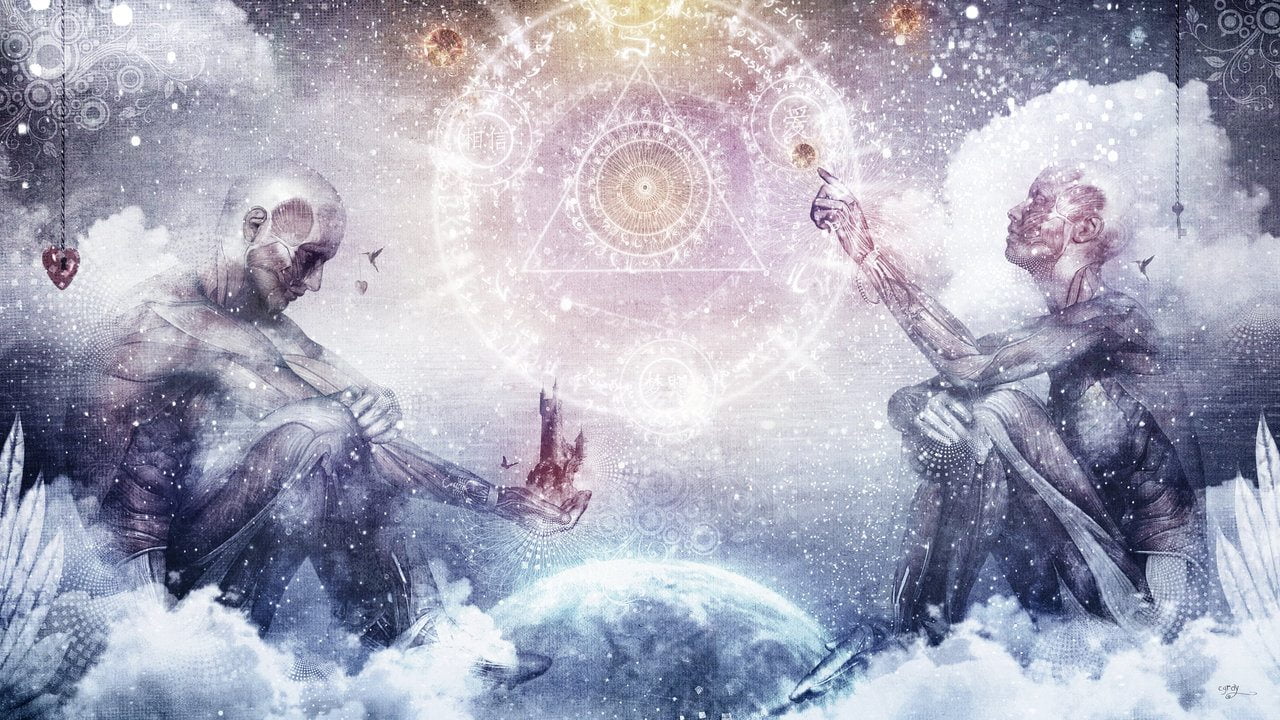 Many will wander after the false stars outside of themselves and give their power away.  This is how one’s power and sovereignty is removed by giving it away and projecting it externally without reciprocation.  Any god that does not answer vividly is false when you call upon your Brothas and Sistas, they answer.

This is clear proofs of who is the Supreme, YOU.

The truth is this perpetual, omniscient design is inside of all of us and forms us.  If we desecrate our bodies with impure foods then we cannot vibrate high, if this was possible one would know all of this already and more.

Slightly out of your view you will see Soul force being harvested by “Fake Merkaba’s” right now.  This looks like flying saucers beaming up something.  The mothership in its original sense was an organic ancestral form that transfers our Souls from one place to another.  What remains is a glazed over human husk set to repeat, and is controlled by the electromagnetic devices that interface with the fields around them, aka Zombie, which is a Voodun term of reprobation.

If you want to know what you can really do about this seek Us out. 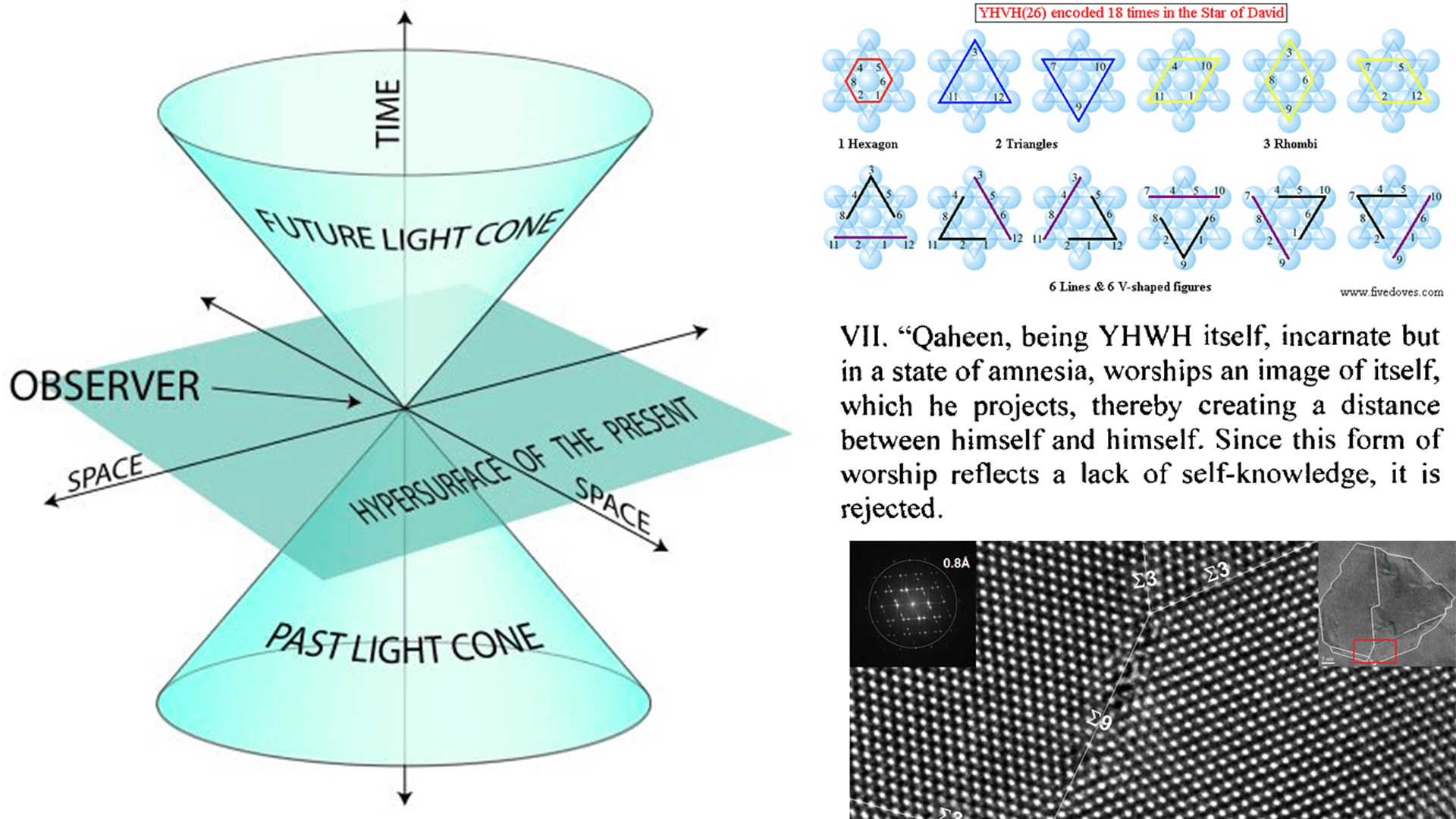 YHVH is Free Energy, it can give and take away; it is Us, not an external god/dog on high.  Look at the British Coat of Arms, that is a Dog in the center.  Your world has been inverted because people keep judging so they lack compassion, and for that, they remain in the Prism/Prison below the speed of light.

Break free with the free energy of compassion.

This is the “compass to Zion”.

Those with ears let them hear the great Ones are forming collectively and the adversary is already accusing people in their monkey minds lowering the collective vibration. 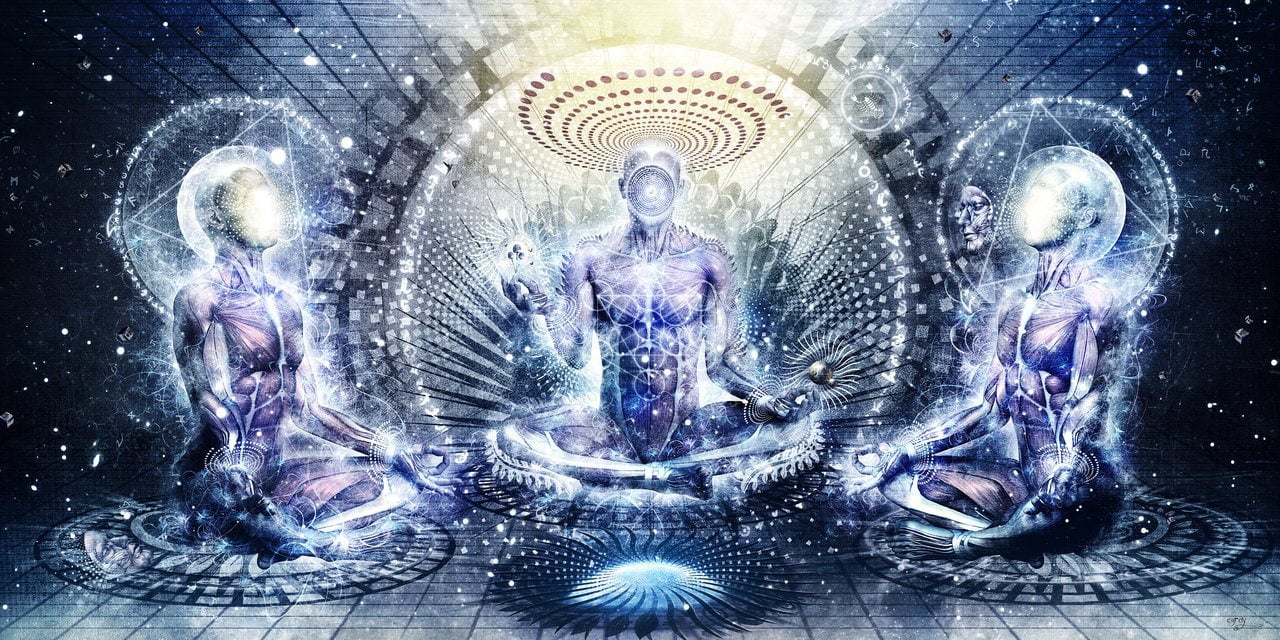 This is the point we came back in time for, Bodhisattvas, Devas, Time Lords, Hoteps, whatever you want to call yourself, get ready to balance this massive energy because the Cosmos is about to awake.

Everything has a correspondence here, let’s bring the Earth through this Birth.

Let’s take a walk down the historical narrative that we began in with Lemuria, and let’s speak on The Deluge and the different aspects of that.

There could be a mental deluge, where every single thing that you once knew is lost.

There could be a physical deluge, like what we will discuss in this article – where you have an entire continent under water, and here is proof that you can see on this map. 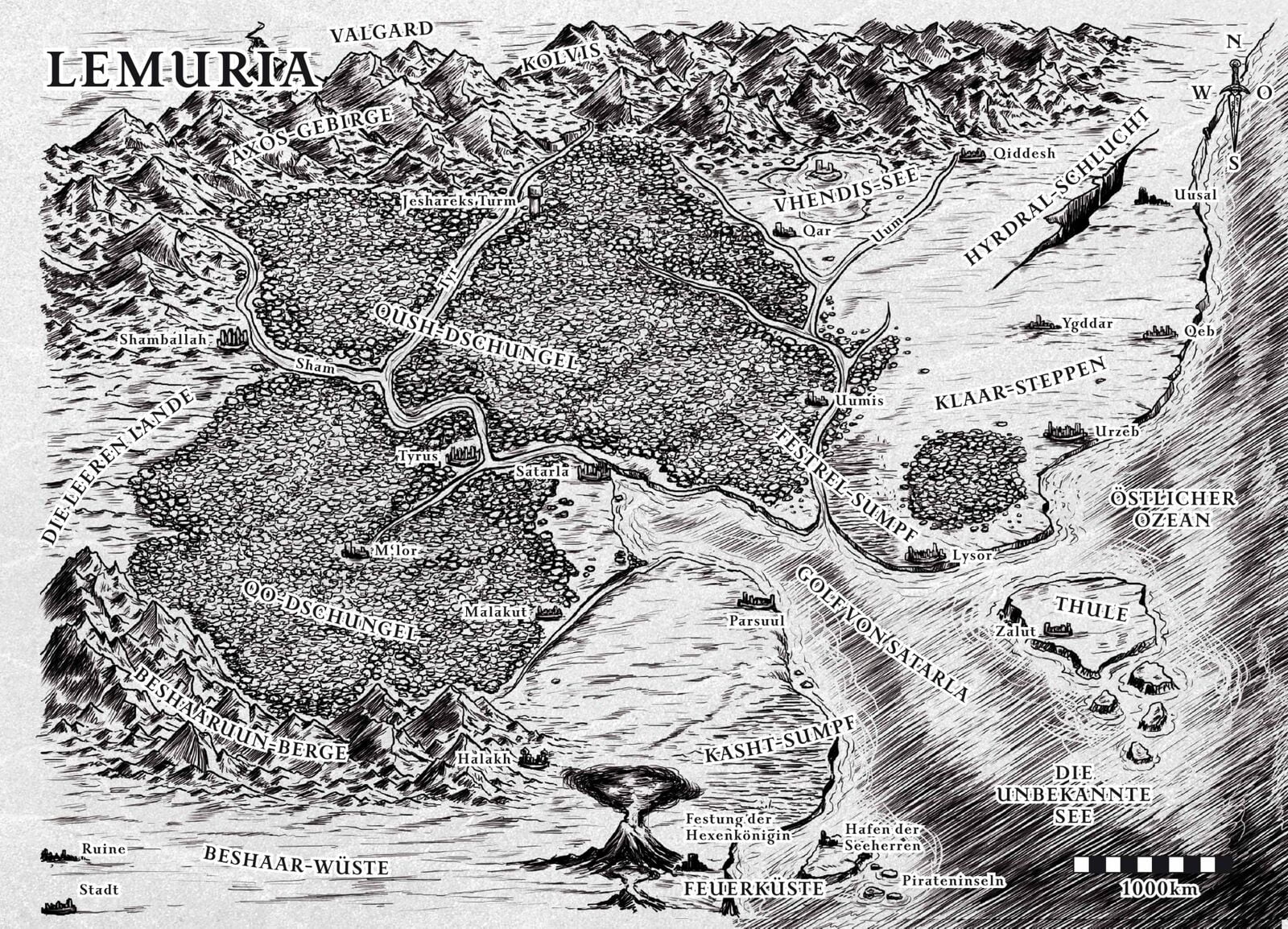 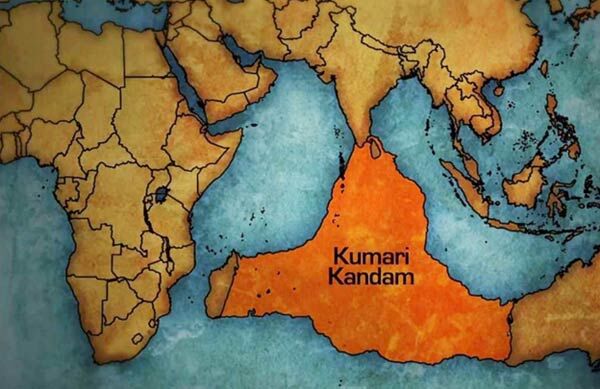 Even to this day, they don’t allow many people to go there – but there are documentaries, done by ABC and the History Channel, where some people that were curious about this idea of a deluge went out to these areas, did some diving, and about 5,000 feet down… found an entire city.

As we keep going, we’re going to be disclosing where the real locations of things like Atlantis are; but right now, we’re focusing on what we’re calling Lemuria or Mu.

Now, as you see it has a different name here because most of these names have been changed, but it is the sheer identity that there is a continent that was in this area that was completely submerged – and that area was “crunk!”

Meaning… Back in the day, since the population is not very high, mankind is in an act of growth. Any other human is really seen as a friend. There are not many conflicts… there are enough things to be going to war with or fighting with, like the animals and the elements.

In this period, we find that a lot of people condense themselves into a specific area and have what would be seen as a Golden Age– where all these arts, delivered from the awareness of your own consciousness, are then bought out into the physical reality – this gives us our word technology.

Technology is anything external to yourself.

The technologies were at their height in this specific area, Lemuria.

For one reason or another, it all sunk… and the result of that is what you see here in some of these images. 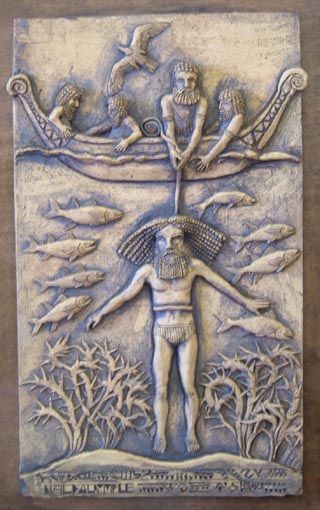 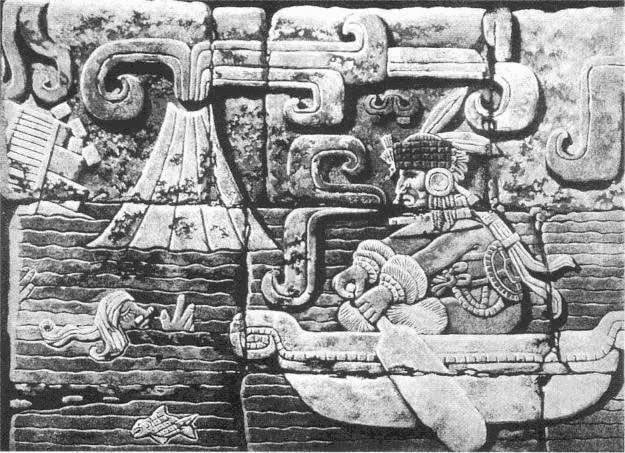 In these pictures, three different cultures are saying that they experienced this deluge.

I know this to be a fact because when you look at this map where the red triangle is .. Kumari Kandam on this map is actually where that continent is underwater.  The people that were inhabiting that continent had no choice but to leave, and it brought about these different civilizations you’re seeing on the map. 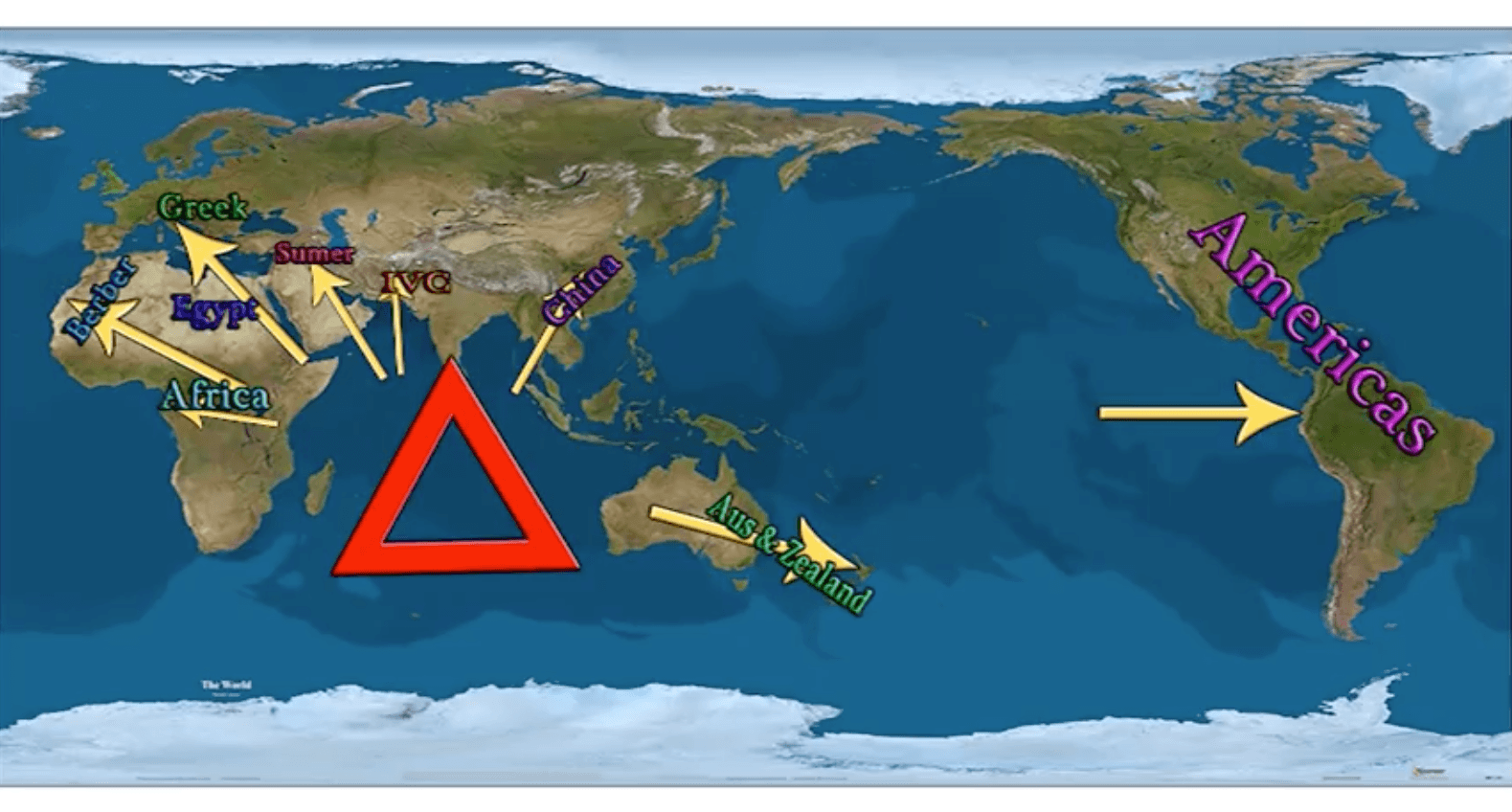 You know the gig is kind of up – If we play the separatist game all our lives, we’ll never see just how connected everybody really is.

It works kind of like a marker running on out of ink. If you’re able to jump to the next racial group (all that being predominantly controlled by the environment that these groups inhabited) you’re able to see the connection in the racial group that comes after that and so on.

After the Deluge, what specific groups can we highlight?

Between the Sumerian and the Mayan cultures, we see more of this evidence than pretty much anywhere else… and it’s because these two cultures not only survive The Deluge but get to a stage of flourishing again.

As we look at the Mayan empires and all the imagery & culture, we find that after fleeing from The Deluge they went into Peru.

Many of the cultures that we see in that area all center around these ideals that we’re going to be talking about that these ancient people shared; ideals about what they believed in like the seven steps of the pyramids that we see even now as the Sun temple; the seven days of the week; the seven primary celestial bodies … you can start tracking that culture as you see them begin to spread that knowledge.

All this knowledge comes from an original culture.