“It is not that the Way broadens humans; it is that humans broaden the Way.” ~ Confucius

There are roughly 4,200 religions in the world today.  Most people believe in only one of them and renounce the other 4,199, while a small minority renounces all of them.

There are roughly 7.3 billion people on the planet today, and every single one of us has a different psycho-physiological interpretation and perception of what spirituality and religion mean.  But, and here’s the rub, spirituality is inherent within the human condition and is as unique as our own fingerprint.

Religion is the parochial dead-end path of our ignorant forefathers, whereas spirituality up-ends that dead-end path and allows for a personal journey with the numinous.  Indeed, as Hingori said, “Spirituality begins where religion ends.”

Here are seven differences between religion and spirituality:

Dogma has been a serious psychological hang-up for our species for thousands of years.  Our tendency to become rigid and inflexible in our thinking is an all-too-common problem.  We are a young species, after all.  There is still so much for us to figure out, and it can be daunting as hell (pun intended).

The problem is we tend to avoid an intimidating cosmos by closing ourselves off into the overly comfortable and placating nutshells of religion.  We shut down the sacred quest.  We close off the search.  We place all our eggs into a particular “basket,” swearing off all baskets, even at the risk of forsaking the baskets that have the potential to help us flourish.  In short: we become dogmatic and closed-off from the numinous.

But there is newfound hope when we are able to transform dogmatic religiosity into flexible spirituality.  True spirituality up-ends the baskets that we cling to.  It shatters the all-too-precious eggs on the tough-love concrete of an interconnected reality, revealing that flexibility and the ability to adapt and overcome are the way to move forward when facing a vastly unknown and astonishingly mysterious universe.

2) Spirituality is liberating (courage-based); religion is authoritative (fear-based): “That which can be destroyed by the truth should be.” ~ P.C. Hodgell

It’s so easy for the majority of us to allow an authority to do our thinking for us.  Most of us were raised in authoritative cultures and conditioned by biased indoctrination, after all.  Unless at some point we are taught to question things, it’s all too easy to get caught up in authoritative jargon.

No matter how outdated or nonsensical that jargon is, if we don’t learn a courage-based disposition we’ll always be caught in the fear-based indoctrination of authority, mostly due to the power of cognitive dissonance.  Spirituality is the courage-based liberation of the soul from the fear-based prison of church and state.  It frees compassion, empathy, and morality from the fallible stranglehold of human-made laws. 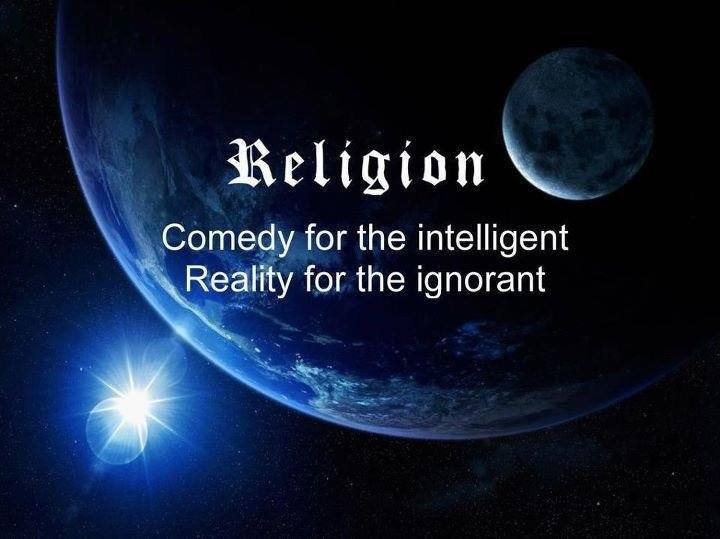 If, as H. L. Mencken surmised, “[m]orality is doing right, no matter what you are told.  Religion is doing what you are told, no matter what is right,” then spirituality is tapping into the forces behind what makes things “right” or “wrong” (a universal healthy/unhealthy dynamic) and acting on those forces in a moral way, despite the declarations of church and state.

3) Spirituality is a painful growth; religion is comfortable stagnation: “The path of the spiritual warrior is not soft and sweet.  It is not artificially blissful and pretends forgiving.  It is not fearful of divisiveness.  It is not afraid of its own shadow.  It is not afraid of losing popularity when it speaks its truth.  It will not beat around the bush where directness is essential.  It has no regard for vested interests that cause suffering.  It is benevolent and it is fiery and it is cuttingly honest in its efforts to liberate itself and humanity from the egoic ties that bind.” ~ Jeff Brown.

Religion keeps us pampered and contented.  We feel nice and cozy in the teachings passed down by the authority of our forefathers.  And why not?  It’s so much easier to just lean on the laws created by other men.

No matter how outdated or ridiculous those laws are, and no matter how fallible and imperfect those men were.  There’s no thinking involved.  All we have to do is obey and not question any of it lest we appear blasphemous in the eyes of our peers.  Easy!

True spirituality flips the tables on blind obedience.  No fear, only fearlessness.  It questions outdated laws.  It upsets all dogmatic apple carts.  But it is not without pain.  It is not without existential angst.  As Eckhart Tolle says, “the fire of suffering becomes the light of consciousness.”

A spiritual person is a beacon fully lit, brightening an uncertain shoreline where waves of doubt crush the beaches of certainty.  Those who are spiritual dip in and out of all religions, ideologies, mythologies, and philosophies, taking the healthy with them and leaving the unhealthy behind.  They are existential alchemists, transforming religious lead into spiritual gold.  And such gold shines all the brighter in dark times. 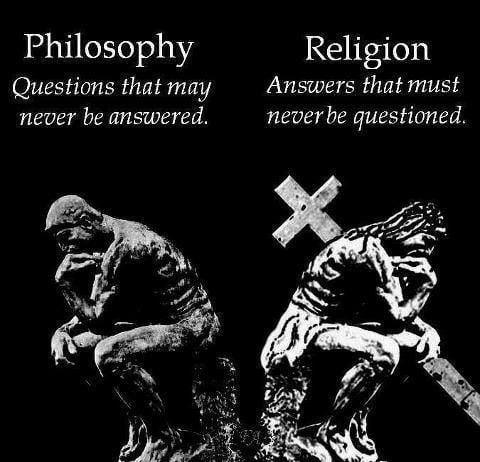 4) Spirituality is open-minded; religion is close-minded: “To conceive of ourselves as fragmentary matter cohering for a millisecond between two eternities of darkness is very difficult.” ~ Sebastian Faulks

A religious person stubbornly believes; a spiritual person takes things into consideration and lets things go.  If “belief is a wound that knowledge heals,” as Ursula K. Le Guin states, then open-mindedness is the scar left behind: flexible and robust from the harsh lessons of vicissitude.  In spiritual circles, curiosity is allowed to be foremost; in religious circles, curiosity is atrophied by the reliance on outdated “answers”.

Where religion blindly clings to what it believes is right, spirituality openly surrenders to what could be healthy.  Those who are spiritual tend to be more open-minded precisely because they are free to question everything, to practice probability, to embrace being wrong, and to remain curious and skeptical in the face of parochial authorities grown uncouth through the passage of time.

5) Spirituality is interdependent; religion is codependent: “Stop acting so small. You are the universe in ecstatic motion.” ~ Rumi

Religion is codependent upon the establishment of church and state.  Spirituality is interdependent despite establishments.  Where the religious person submits to the authority of religion and politics, the spiritual person subsumes all religious and political strongholds through flexible inter-connectedness, thus transcending entrenched power constructs.

Spirituality is a force of nature, and the spiritual person becomes a fountainhead for an ecstatic universe, a mighty conduit, an existential pivot where the cosmic dance between an independent observer and observed interdependence is free to take place.  There is a music in this sacred space that doesn’t use words, and the spiritual person has the ears with which to listen. 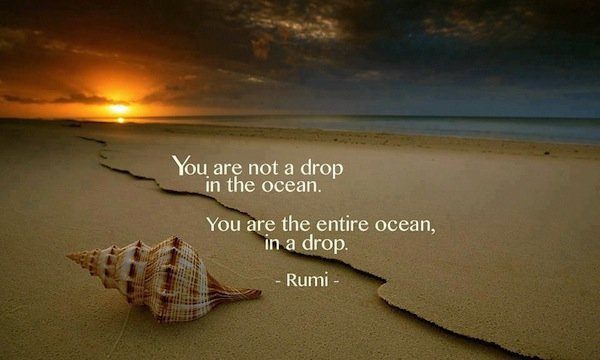 6) Spirituality speaks a language older than words; religion speaks a language limited by words: “The poet and the musician together speak a natural and universal language… The original language that all creators spoke before the fall of man. This language is, of course, the language of the birds.  And, what does it mean?  What does the shape of a tree mean?  What do clouds mean?  What is the meaning of the way the stars are scattered through the sky?  Both poetry and music lead us to the understanding of what this world is all about. Which is: It’s a dance.  A rhythm.” ~ Alan Watts

Within the mysterious rhythm of the cosmic orchestra playing itself out, the spiritual person dances in full glory.  While the religious person cowers in fear of God, the spiritual person pirouettes through the fear and dances with God.  For those who are spiritual have tapped into the interconnected Mecca.  They are milking the essence of all things, the language of birds and sky, fire and ice, life and death, permanence and impermanence –the voice of God and the song of Infinity.

The Truth is a gamboling gamble, and those who are truly spiritual are gamblers par excellence, knowing that the human condition is fallible and flawed, but having the ontological wherewithal to rise above it with an act of Promethean courage that topples outdated godheads.

They rise up with a full heart, with audacious love, with a throat Chakra in full flutter speaking fluently A Language Older Than Words.  But they are still not afraid to speak their experienced truth.  For as Gustave Flaubert observed, “Human speech is like a cracked kettle on which we tap crude rhythms for bears to dance to, while we long to make music that will melt the stars.”

7) Spirituality allows the Great Mystery (God) to be truly infinite:  “How is it that hardly any major religion has looked at science and concluded, ‘This is better than we thought! The Universe is much bigger than our prophets said, grander, subtler, more elegant?’  Instead, they say, ‘No, no, no! My God is a little God, and I want him to stay that way.'” ~ Carl Sagan

Spirituality is vulnerable intimacy with the Infinite.  Religion is veiled invulnerability pretending to be intimate.  A spiritual person understands that Infinity cannot be pigeonholed into finite constructs.

God cannot be crammed into human-made models.  Through such understanding, the spiritual person transcends the finite game of religion in order to play the infinite game of spirituality.

Where the religious person is desperately looking for his/her own reflection, the spiritual person has become Reflection itself, understanding that there is no duality, only the illusion of duality.

There is no finitude, only the illusion of finitude.  They are walking, talking, meditating Mirrors dancing as Reflection between micro and macro, flesh and spirit, man and God, order and chaos, entropy and life.  They have risen above the empty placation’s and petty platitudes of religion and have embraced the open explication and flexible interpretation of the Great Mystery through spirituality.

The spiritually robust have moved on from the shackles of someone else’s experience in order to feel their own experience, understanding, as Angeles Arrien did that “we are all unique medicine“. 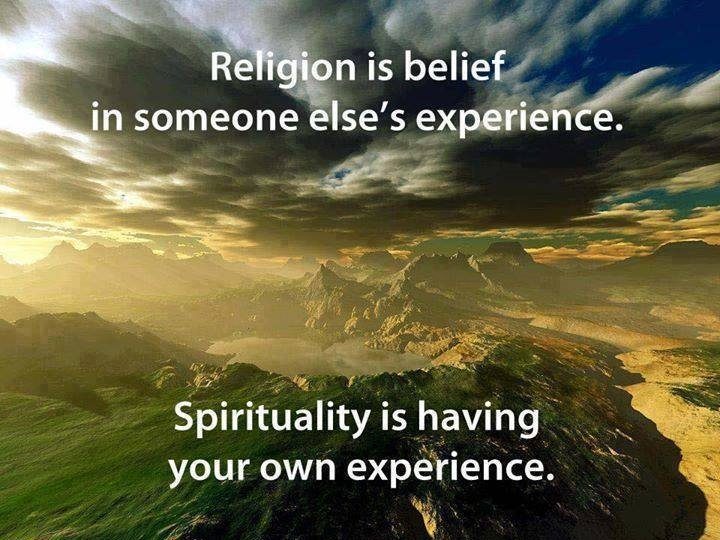